An asteroid 45 metres in diameter and weighing around 130000 metric tons will pass close to the Earth on the night of 15/16th February 2013. Asteroid 2012 DA14 was discovered in February 2012 by the OAM Observatory, La Sagra in Spain, when it came within 1.6 million miles of Earth. This time it is estimated to pass about 14000 miles from Earth’s surface, which is inside the orbit of geostationary satellites. There is no chance of any earth impact. It will not be visible with the naked eye, but will be at magnitude 6 or 7, travelling from southwest to northeast at half a degree (one moon diameter) per minute. 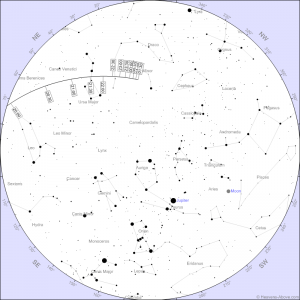 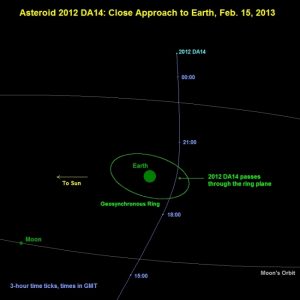