Roy Worvill was born & educated in Chipping Norton and following war-time service in the Royal Navy became a teacher of Mathematics, History and English in local secondary schools. He was a keen amateur astronomer and wrote articles for several publications including monthly “Sky at Night” articles for “The Oxford Mail”  ( 1957 to 1977 ) and “The Eagle” boys magazine. He wrote ten books including several in the Ladybird series for children which became very popular and were translated in to many different languages. The Virgin Galactic chief test pilot, David Mackay, took a copy of  the Ladybird book “Exploring Space” with him on his  space flight in February 2019 because it had inspired him as a boy to become an astronaut. A BBC “Sky at Night”  presenter also remembers the book from her childhood. 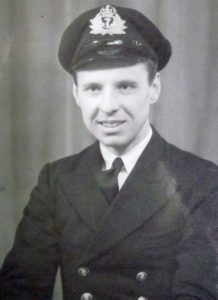 RBW in 1944 – Astronomy from a warship (HMS Chelmer) in the atlantic on convoy protection duties! 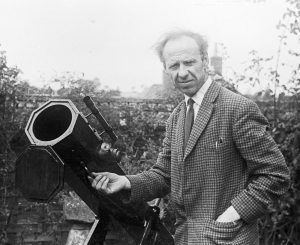 RBW with his 6″ Newtonian reflector telescope about 1962
The octagonal tube was made of oak and had brass fittings. 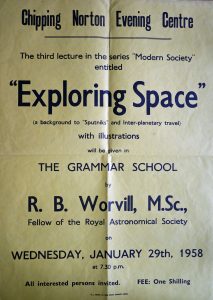 As well as writing articles and books he also gave talks to interested local organisations.

His first articles for the Oxford Mail can be found here:  OxfordMail-1956

The “Exploring Space” title was revised after the moon landings of 1969 and translated in to Welsh & Arabic – shown above – as well as many other languages. 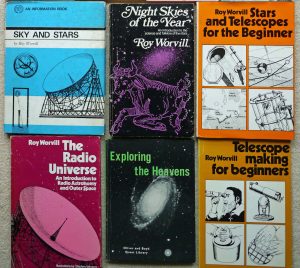 His first two books “Exploring the Heavens” and “Sky and Stars” were for the schools education market. 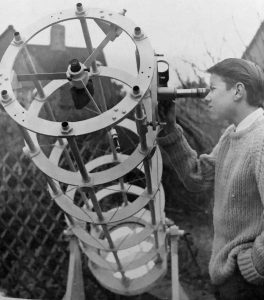 This 18″ Hindle reflector was the biggest scope he owned and it was later transferred to Keele University observatory and mounted on the even bigger refractor which they had obtained from Oxford. 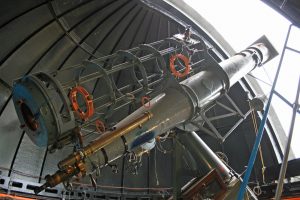 A note on Geoffrey & Margaret Burbidge